Under the Cotton Tree – Part 1 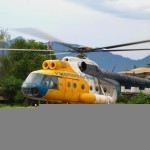 The plane touched down on the uneven runway at Lunghi International Airport at dusk. Holding a UN Laissez-Passer passport facilitated immigration and customs clearance formalities. However, at the arrival hall I was overwhelmed by porters falling over themselves to provide some form of service to earn them a tip. I had great difficulty in remembering their faces. Several porters who had nothing to do with my luggage confronted me for tips!. Having been to many  “nicely untidy” places before, the chaotic situation here “takes the cake”. Even the airport staff and local policemen participated in the organized chaos !!

Truly an airport Is a county’s gateway and window to the world. First impressions are unforgettable – often prejudiced. My first arrival to West Africa was stressful but in retrospect it was just a larger version of what I had experienced in other least developed countries (LCD). Much could be glinted by an observant traveller about the local social condition and culture on arrival. Airport experiences here could be stressful, hilarious or even memorable  - an exciting change compared to the “conditioned boredom and contrived civility” in high end aviation hubs.

After the chaotic encounter, the helicopter flight across Tagrin Bay to Aberdeen was a pleasant relief. The lanky pilot, who looked like a character from Indiana Jones, took to the cockpit and requested us to fasten our safety belts and take note of  life-jackets under our seats. I groped clumsily in the dimly lit cabin for my missing belt buckle. Then I tried to locate the life jacket. One of the seasoned passengers skeptically remarked: “Don’t  bother! No jackets “. Nervously I broke into a silent prayer and out of sheer bravado silently muttered to myself ” Oh My God – get along with it  man – ces’t la vie!” The engine sputtered and protested, then chop, chop, chop – we were actually airborne. Hallelujah! This bird could fly after all!! Once over the bay and gotten used to the chop, chop rhythm of the rotor blades – I thought the ride was rather exciting as the rattling and shaking synced with my awakened senses. Freetown is a coastal town with practically little or no street lighting. Fleeting glimpses of dancing lights as the silvery moon cast its magic upon the waves caught my attention along Lumley beach. I checked into Paramount Hotel situated near the Cotton Tree in the heart of Freetown. 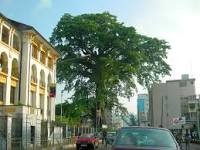 The Cotton Tree (Ceiba pentandra) is the historical symbol and iconic landmark that dominates the central square in downtown Freetown, the capital city of Sierra Leone,  It serves as a busy round-about overlooking the main Siaka Steven street and is in the vicinity of the Court House and other historical buildings. It is a gigantic tree with a sprawling canopy that is home to a large bat colony the size of flying foxes in Matang, Taiping. These nocturnal creatures blanket the sky at nightfall on their foraging raids around the Western Hills filling the air with a cacophony of screeching and shrieking calls.
Historically Freetown was founded in 1792 by former slaves who earned their freedom because of loyal service to the British Crown during the American War of independence. According to tradition they landed on the shoreline and held a thanksgiving service at a giant tree above the bay for their deliverance. This was the slave market place where thousands were sold annually. Export slavery was major business from the late 15th to mid 19th century. Transatlantic slavery trade was officially banned in 1807 but continued illegally for several decades. The British outlawed slave trade earlier than the Americans.

To the early settlers it was not a deliverance to a “biblical promised land” but an implantation of “Americanized” ex-slaves into a colonial enclave against the backdrop of a large number of hostile local tribes. In 1787, 52 sq.km. of land was privately bought by a group of philanthropists near Bunce Island from a local chief to resettle ex-slaves. Many perished due to disease and other causes. By 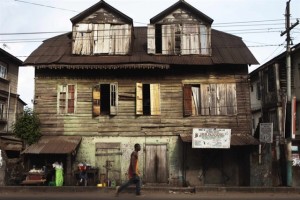 1798 Freetown had 300-400 houses with architecture resembling the American south. Along the coastal suburbs the rusty tin roofs of shanty villages seemed to form a continuous sheet of red merging into the sea.

In 1808 Sierra Leone became a British colony ruled by a Governor. To counter growing French influence and it’s “encircling strategy”, the interior of Sierra Leone became a “protectorate” in 1896. Recent turbulent and bloody history of Sierra Leone stemmed partly from her tribal history on the one hand and the greed of those who wish to exploit its vast mineral resources on the other – of which the protracted “blood diamond” 1991-2002 civil war was an example aided by neighboring Liberia.

In colonial times the tribal chiefs were  “paid” to keep the peace as otherwise they would be euphemistically dealt with by “other diplomatic means” by their dapper overlords. Today the country has sixteen tribes. The two largest and politically most influential are the Temne living in the northern coastal parts adjoining French speaking Guinea and the Mende in the south-east. Freetown is occupied by Christian Krios. Officially English is the national language but Krio is the lingua franca and de-facto unifying language.

A common form of greeting apart from “Kushe” (Hello) is “Aw’s de boddi?.” (How is your body?) and “Mi gladi fo mit yu” (I am happy to meet you”). In the past, most Chinese would greet one another with “Have you eaten?” –  perhaps conditioned by the frequent occurrence of famines in their motherland. Slaves, by definition, have nothing but their bodies as they are totally resourceless  - so it makes sense to me. Coincidentally many poor folks  I met would use “Master” as a form of address.

Speaking of food, I had never eaten Indian or Chinese food in Freetown. Most of the businesses were operated by Lebanese. Salads/potato chips/pita bread with hummus dip, and standard western cuisines were available. Paramount Hotel served a delicious fare of “Freetown curried prawns”.  In follow-up missions I was given a car and was able to wine and dine sumptuously at Alex’s bar (barracuda steak with garlic bread and Star beer) and other exotic places.

I woke up to a blazing morning and walked up hill to our project office a short distance away. It was an antiquated two storey ex-colonial administrative building with rusty moulded iron frames, cast iron balustrade verandas, missing rickety floor boards, rusty tin roof and wooden cladding walls. It was a sight to behold! I climbed the rickety   stairs and gingerly treaded upon the rotting floor boards to the Chief Technical Officer’s (CTA) office. Mr Keats Hall was the ex-DG of the Jamaican Forest Service with proven managerial and networking abilities. Protocol visits to FAO Representative (Dr. Bolle Jones), UNDP Resident Representative ( Mr Practor), Forest Dept. Chief (Mr Koroma) and his Deputy (Mr Prince Palmer) were arranged and networking with related NGOs established. Freetown was a small place and getting around was not very difficult as there were few vehicles. However, the road condition could be much better.

The dire socio-economic condition in Sierra Leone drew the concern of many donor agencies and foreign NGOs. The country was on the verge of economic collapse, anarchy and political limbo. Average life expectancy was among the lowest in the world around 40 years (1987), At its peak, inflation rate exceeded 250 percent. The negative impacts of HIV/AIDs incidences on the young and able were felt. I was paid a bagful of Leones, the local currency, to cover my duty station expenses.

(To be continued. Part II)