Despite the diaspora of my classmates over several cities in several countries, through the miracle of the wireless communications, the efforts of a few and the enthusiasm of many, we who have sat in the same classroom (most of us from ACS Primary 1) have somehow or rather found ways and means to keep the camaraderie and bonhomie going over the span of decades.

Some went abroad at a tender age (boarding school abroad or as Asean scholars in Singapore), some stayed on and boys became men through the Fifth and Sixth Forms, and most went their separate ways after 1983, with few others pursuing undergraduate studies together at the National University of Singapore. Several came back to Ipoh after tertiary education and carved a living there. Many sought greener pastures in Kuala Lumpur and Singapore. The rare breed carved a niche in the UK (including Mr. Yip’s son, Richard Yip and Dr. Tham’s son, Tham Chiew Hong), Australia and New Zealand.

One son of a gun, Leslie Loh Hip Ping, a music aficionado and currently owner of his own music publishing company and the wellspring of many a concert featuring evergreens from yesteryear (especially of the Cantonese variety), made possible with his IT background the formation of a Yahoo group for the classmates. Thus, began our journey in ether – as a collective, we shared ideas, we fantasized, some quarreled over overzealous comments, but that was the seed from which our camaraderie was rekindled after leaving our school benches. From this humble beginning, another son of a gun, Alan Wong Kok Wah aka CEO, organized our very first grand reunion in KL and we turned up from all over – Ipoh, Singapore, Australia and New Zealand. There, amidst the potbellies of success (or lack of exercise, if truth be told), we found the skinny, lanky geeks of yesteryear had transformed into Bollywood or Cantopop hunks to whom the years had been kind. What a surprise it was! Boys who ran helter skelter in the school field playing “poh piah” (usually running away from me as I had a particularly strong arm) had “transmutated” into captains of industry, professionals from every discipline, and shrewd businessmen – it was marvelous to behold – yes, we had the run of the mill doctor, lawyer, engineer and accountant, but we also had men of vision in other fields and disciplines that made us proud! We had a ball of a time reminiscing about the pranks we played, the girls we used to chase (or most likely imagined that we were chasing), the “hot” teachers, the “difficult” teachers and of course the shenanigans involving the library, the theatre, the swimming pool and Mr. Brian! Some of the stories are not to be published.

One year, we had a reunion in Ipoh coinciding with the World Cup (football) and I remember we had dinner, some of us with a smattering of talent performed songs, partied away and caught the finals. As soon as the final whistle blew in the wee hours of the morning, we ambled over for dim sum at Foh San.

With the advent of Facebook, Leslie gently took us over to a new genre for keeping in touch. Alan organized dinners on the occasion of each other’s birthdays, attended by all family members, and the wives became fast friends. We all felt blessed that we had this decades’ old friendship.

We had several other reunions over the years, rotating between Ipoh, Kuala Lumpur and Singapore. Whenever one of us went outstation, the classmates who resided in the city of our sojourn rounded up the rest and organized a dinner or KTV session. We often put up visiting classmates from outstation in our homes. It was as if a sibling was visiting and each visitor was not treated any less than family.

Some of us made a point over the years to have common activities like badminton and golf. Of course, with the knees and the cardiovascular engine not being what they used to be, a gentle Sunday morning hill climb or drinks at one of the city’s watering holes have been our cup of tea of late.

We also attended Alumni dinners, though it seemed that we were usually the youngest batch, but it was nice to get together, polish umpteen bottles of the Scottish nectar, and rub shoulders with our old teachers and seniors.

From Facebook, we have now migrated to Whatsapp with our own “ACS Kaki” sub-group, where we have already made plans to attend the Alumni dinner in Ipoh for 2013.

It also helps that many of us are fond of our music and more often than not a song from the 1980s simply rings the cathedral bells! A particular song brings on a flashback to the exact moment in time in our past. Many of us are also fond of singing, so the odd KTV session (those that have been permitted by the Home Minister, after several applications filed in triplicate had been deliberated upon) has also been an opportunity to gather and let our hair down and be boys again. In the age of smartphones, iPods and thumbdrives, it would not be surprising to find that most of my batch would have songs from the 1970s and 1980s in our playlist!

It saddens me that our children will never ever enjoy the brotherhood, the camaraderie, the memories, and even the pranks (some of which are legendary) and mischief we shared and continue to indulge in. As one often observes, those days we played and ate in the dirt, the heat and the rain and we shared what we had, whereas nowadays it is as if our children live in a world of Clorox wet-wipes – surgical and unattached.

Next year, we turn 50 and we are planning another grand reunion, perhaps in an exotic location. 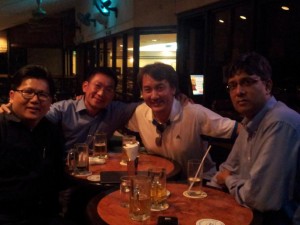 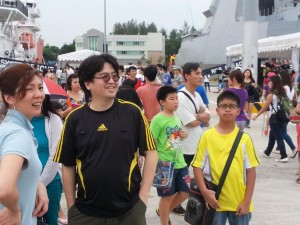 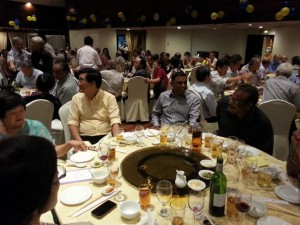 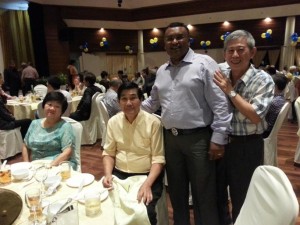 Mr & Mrs Michael Lee, Thilakan Ramalingam and you know who! 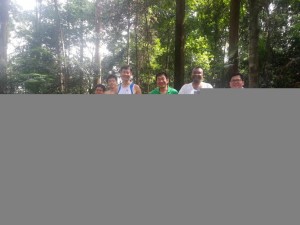 Thilakan Ramalingam [Cohort: 1979, Form3]
(Thilakan, the son of Mr. S. Ramalingam, our renowned Mathematics teacher, was sent to continue his education at a boarding school in England after Form 3. His classmates who stayed on in Ipoh ACS, completed Upper Sixth in 1983. Thilakan runs his own legal practice in Shah Alam.)