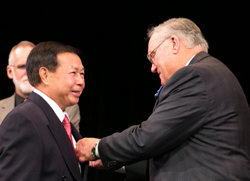 A new commemorative medal was created to mark the 2012 celebrations of the 60th anniversary of Her Majesty Queen Elizabeth II’s accession to the Throne as Queen of Canada. The Queen Elizabeth II Diamond Jubilee Medal is a tangible way for Canada to honour Her Majesty for her service to this country. At the same time, it serves to honour significant contributions and achievements by Canadians.

Choy Mow Thim left for Canada in 1969 with $14. He ended up in Edmonton because his sponsor lived there. Hard work and his cheerful outlook in life led him to own his own company selling cash registers and other machines that businesses use. ACS Ipoh taught him well in looking for the best in people. He did not forget his humble beginning and he has been helping people whenever and however he could. Brought up a Buddhist, he had no problem providing a building to a church in downtown Edmonton to run a soup kitchen for the homeless. And he has been subsidizing its operation with a sizeable donation each year. When he turned 65 last year, he bought a treadmill and new shoes to keep fit. The shoes ended up being used just once. He gave them to a homeless man walking barefoot in the cold.

People in the Chinese community in downtown Edmonton turn to Mow Thim regularly for advice for issues affecting the old, the poor and the sick. And, realizing that sports are important for health, Mow Thim had been active in promoting baseball. He helped Edmonton host  7 baseball competitions involving teams from other countries. Mow Thim represented Malaysia in cycling at ASEAN Games in the 60’s and also in Tokyo Olympics in 1964 He officiated in the Commonwealth Games when it took place in Edmonton in 1978.

This year, the government recognized Mow Thim’s contributions to the community by presenting him  a commemorative medal to mark Queen Elizabeth’s 60th anniversary for her ascension to the throne as the Queen of England ( and of Canada).

Mow Thim is also a part-time auctioneer. He once bought 22,000 pairs of shoes from a bankruptcy sale. A police officer learned of that and encouraged his brothers in uniform to buy shoes from Mow Thim. That was how the community returned the love he has been giving to others.  Mow Thim has done ACS Ipoh proud.

Choy Mow Thim (standing in the middle),  this photo was taken circa 1996. He was school cross country champion in 1963 in class II and also a Malayan cyclist Champion in 1963. (Info by Mr Wong Yoon Hoi)

(Cohort: Form 6 Upper Arts B 1967).  Hock Keat currently resides in Vancouver.  He was in the Malaysian Foreign Service before re-locating to Canada.